Honoring the Fallen on this Memorial Day

Home » Honoring the Fallen on this Memorial Day 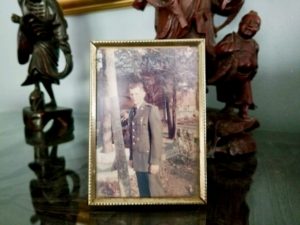 “My husband lost his cousin and best childhood friend during the Vietnam War,” said Mary Trier. “Kenneth Trier’s photo sits on a dresser in our bedroom.”

Since our team opened its business over 12 years ago, Capital Communications has had the distinct privilege of supporting our armed forces — both directly and indirectly. On Memorial Day, we take time to reflect on why this holiday exists, and how it differs from other holidays that honor our military service members and Veterans.

Memorial Day is observed on the last Monday of May. It honors men and women who died while serving in the U.S. military. It was originally established as Decoration Day after the Civil War and became an official federal holiday in 1971. Although the day is sometimes associated with parades and BBQs, it is a much more somber time where many Americans visit cemeteries or memorials to pay tribute and remember those who gave the ultimate sacrifice.

For our founder’s family, the holiday has a very personal meaning. “My husband lost his cousin and best childhood friend during the Vietnam War,” said Mary Trier. “Kenneth Trier’s photo sits on a dresser in our bedroom. My husband reflects on the carefree spirit and remembers their shenanigans, what a wonderful person Kenneth was, and the special bond they had. He will never be forgotten, just as we all must purpose in our hearts to remember the many men and women who have fallen while serving our Nation.”

More recently, our entire community was struck when our very close friend and fellow business owner, Jovanna Nelson, lost her son, Brenden Salazar, in July 2012. We will always honor and remember him.

As we serve our community, there are a number of Gold Star mothers, fathers, and families that serve right along side us. Their sacrifice and their personal service reminds us every day that freedom truly isn’t free. On this Memorial Day, we pay tribute to them and all who have fallen in service to our country.

Other military holidays that honor or celebrate America’s military personnel are:

Armed Forces Day, established by Louis Johnson, United States’ Secretary of Defense, on Aug. 31, 1949, to create a replacement for the separate Army, Navy and Air Force Days. The event stemmed from the armed forces’ unification under one department – the Department of Defense, and the first one was celebrated on May 20, 1950. Locally, the service organizations celebrate together each year at reception.

Veterans Day is dedicated to American veterans of all wars. According to History.com, in 1918 on the 11th hour of the 11th day of the 11th month, an armistice, or temporary cessation of hostilities, was declared between the Allied nations and Germany in World War I, then known as “the Great War.” Commemorated in many countries as Armistice Day the following year, November 11 became a federal holiday in the United States in 1938, and in the aftermath of World War II and the Korean War, Armistice Day became known as Veterans Day.

Three special, distinct days, but for our team, every day is a day to celebrate our military service members and veterans – past, present and future. But on this day, we honor the fallen.