My love for the Army started when I was just a child. Barely old enough to look beyond playing with my siblings and understanding all the things that made me happy, I realized that my Dad was a little different. 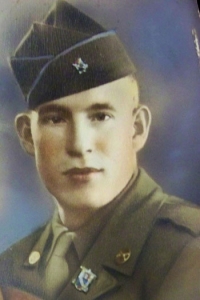 Though he didn’t talk about it much, he was severely injured during his time in the Army – having enlisted right at the end of WWII. While he stood guard duty at his post in Northern Italy, a fellow Soldier fired a shot that nearly severed his right arm. He evacuated and eventually made it to Walter Reed Hospital where the military docs performed many surgeries and brilliantly saved his arm. His arm was never fully restored, and a lot weaker than his left, yet he never complained about it. He was, and will always be, a hero in my eyes.

Later, when I began to work for the Army, I could sense his pride in my work. As part of the Army civilian workforce, I became part of the Army. It was in my heart – still is! I am extremely proud of the men and women who make countless sacrifices to serve in uniform.

My husband did, and my son did also. My daughter, Sarah, serves too, as a Department of the Army civilian. I guess you could say that we are an Army family. No offense to our brothers and sisters serving in other uniforms – to me, they are all heroes!

Yesterday we kicked off “Army week” to celebrate the U.S. Army’s 240th birthday and Flag Day. On Saturday, June 20, our local Association of the U.S. Army will celebrate in style with a birthday ball. And, there’s also some business and the Army Aviation Association’s golf tournament sandwiched right in the middle of these two events.

Our business community will come together with government representatives on Wednesday and Thursday to learn about upcoming business opportunities from Team Orlando. Army, Marine Corps, Navy, and Air Force will share important plans for future procurement opportunities.

It is going to be a great Army week! Happy birthday, Army! You have never failed to answer your Nation’s call.