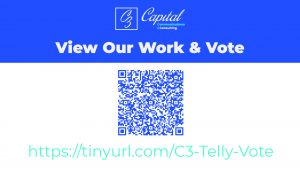 Capital Communications & Consulting (C3) has been selected as a finalist in the 43rd Annual People’s Telly Awards in the “branded content” category for its work with Engineering & Computer Simulations (ECS).

The Telly Awards, founded 1979, originally recognized excellence in local, regional and cable TV commercials. The broadcast business has changed since then, most notably with the rise of the Internet and worldwide use of mobile devices. The Telly Awards have evolved with the industry to honor creative content made, not just for television, but for all types of video work, and for all sizes of screens.

“ECS has always been known as an innovator in the modeling, simulation and training community,” Trier said. “We created the video to reflect their rich history but also to look towards their future as they celebrate a milestone anniversary this year.”

“ECS – More Than” puts C3 in direct competition with the likes of Warner Bros., Ford, GEICO and several other well-known brands.

“I couldn’t be prouder of what we’ve accomplished as a team in producing content that has become competitive with so many Fortune 500 companies,” Trier said. “Although we’re a small business, this honor demonstrates our incredible capabilities in supporting the modeling, simulation and training industry here in Central Florida.”

C3 is a certified women’s business enterprise and woman-owned small business founded in 2006. The company is a leader in providing the full range of marketing, public relations and strategic communications services to DoD, academic, commercial and non-profit organizations in the modeling, simulation and training sectors.

Voting for the People’s Telly Awards is open until April 22. To vote for “ECS – More Than,” go to: https://peoples.tellyawards.com/PublicVoting#/2022/peoples-telly/general/branded-content/ecs-more-than.

Telly Award winners will be announced in May.